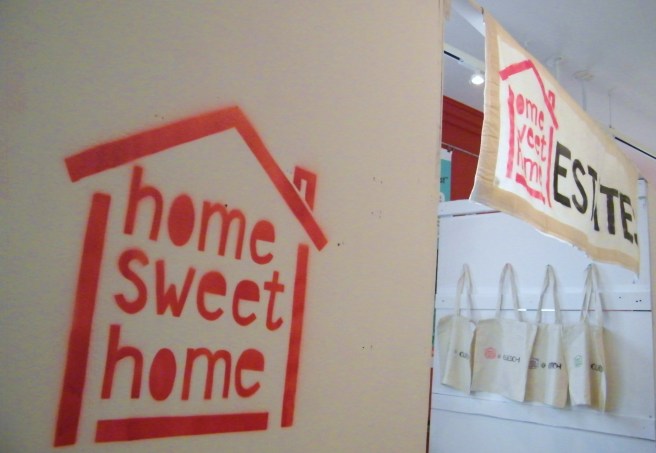 Plotting out the future can be a daunting task, whether it’s for a book club or a neighbourhood. Conflicting personalities, differing goals and incompatible world views can all get in the way. It’s why generating participation is the bane of any planning process. When it’s as high-stakes as public consultation about neighbourhood development, it’s easy to get discouraged by bureaucracy and lobbyists. Things can get discouraging enough, even, to make folks dream of moving to a new place, to avoid the changes that are taking the shine off their current home and to build something that better reflects their own desires. Unfortunately, one neighbourhood’s fleeing resident can become another community’s damaging interloper. 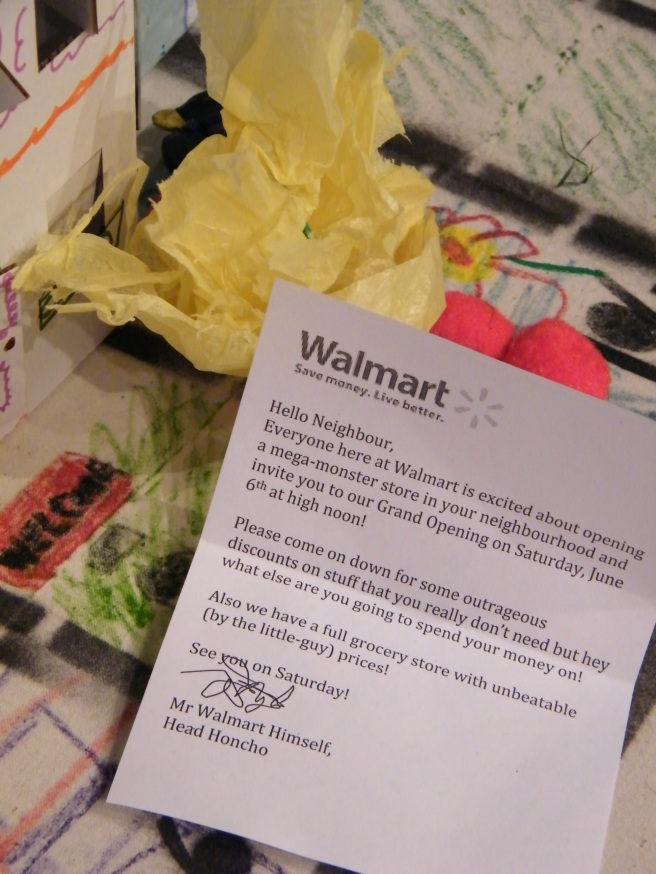 There’s really no such thing as building a community from the ground up, at least not in the real world. But last week, the Vancouver East Cultural Centre presented an opportunity to do so imaginatively, with their home sweet home installation. This piece was created by Subject to_change, a British theatrical company that specializes in breaking down the boundaries of artistic production and putting the spectator into the centre of its pieces. Home Sweet Home has been travelling to sites world-wide since 2007. 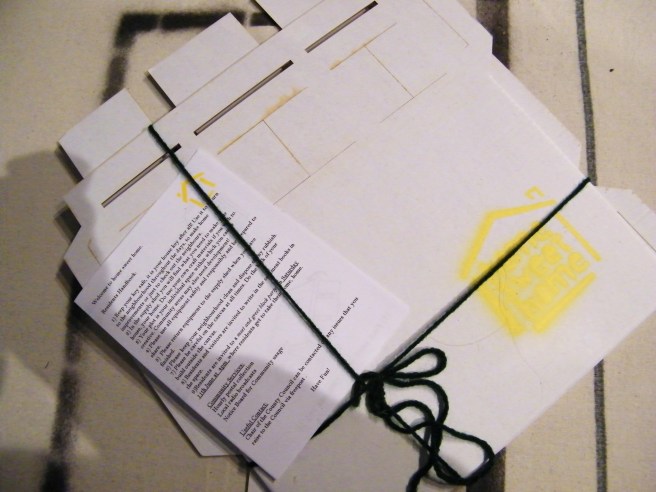 The piece begins as a planned community would, with lots marked out and construction materials at hand. Participants could choose to build residences, businesses or community amenities. Over the course of the installation, residents could also become involved with the community’s radio station and council or simply interact with other residents. 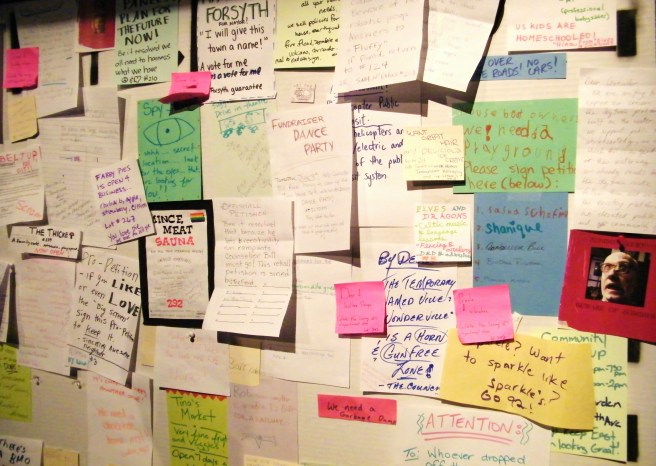 There were elements of the fantastical involved in the community that developed, like unicorn corrals and zombie warnings…actually the radio station and bulletin board seemed to really run with the zombie theme. But what I noticed, having arrived late in the process, was that the little village seemed to be an ideal version of the real-life neighbourhood outside. There were dog parks, community kitchens, bike shops and co-ops of all kinds. There were very few outsized developments and at least one of these was a seniors’ residence. A number of houses were given over to Canucks playoff fever and there was even a tiny East Van sign. 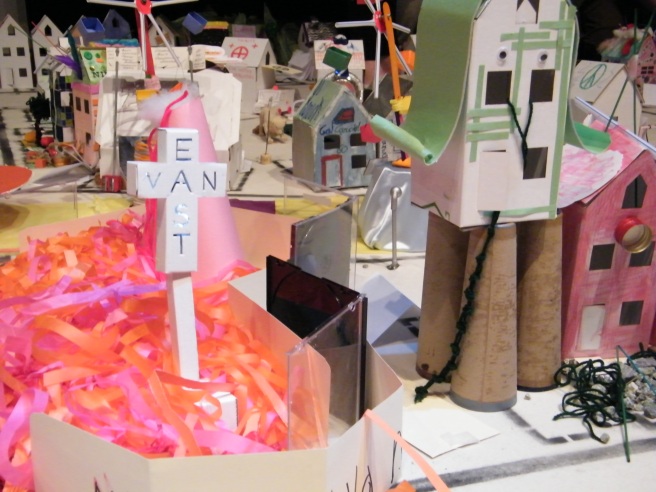 This little East Van also reflected our neighbourhood’s anxieties – the biggest threat wasn’t really zombies (or the ongoing campaign against someone called “Councillor Bob”), but the letters delivered to residents promising an enormous Walmart development. In a neighbourhood where long-time residents are worrying about a future filled with chain stores and cookie-cutter condos, the installation encompassed what we love about this place, what we want for it and what we fear is on its way. 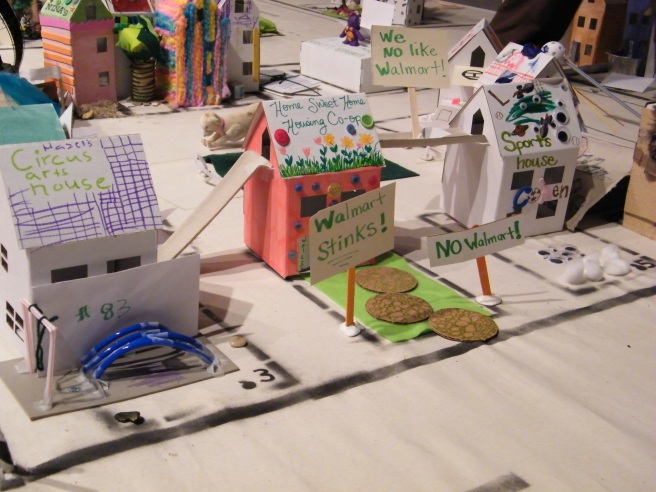 By leaving participants a blank slate, Subject to_change manages to make each iteration of this piece a social commentary, a learning environment and a kind of community carnival all at once. It also allows for artistic expression on a playing field that’s levelled across age groups – there were interesting and provocative structures from kids and adults alike.

I’d like to adapt this concept to some of the organizations I’m involved with – a day long retreat, complete with paper, glue and decorations, might do more to foster dialogue than any number of meetings. 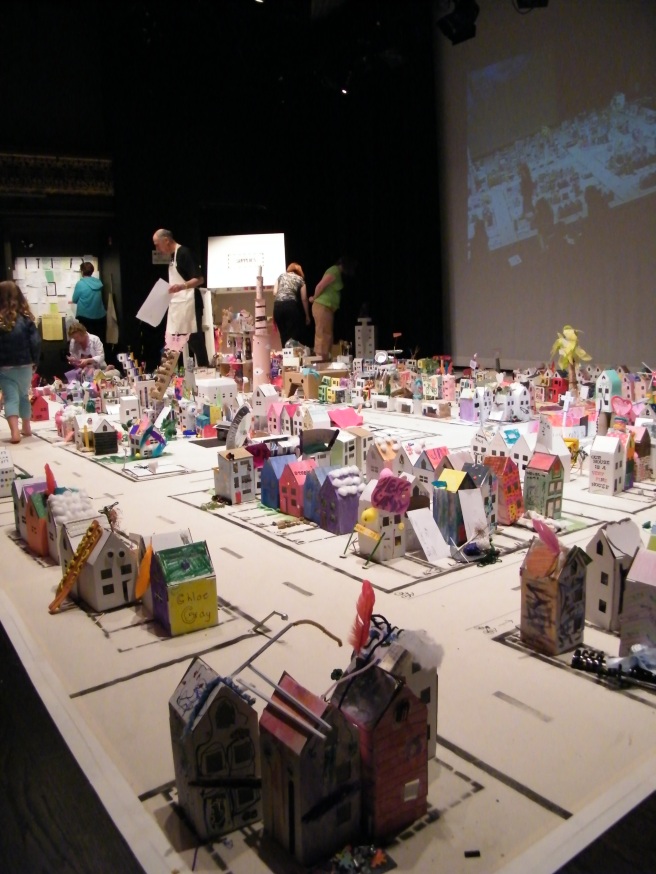 6 thoughts on “From the Ground Up”