It’s not the complicated recipes that evoke sensory memories for me, though I have plenty of other memories about those dishes. My mother’s French Onion soup is inextricably linked with Hayley Mills and The Moon-Spinners, because she once made it for us on a Mother and daughters movie night. Coq au Vin and Angel Food Cake bring to mind special occasions with Tante Leona, my mother’s aunt. Pâte de Cochon and tourtière mean Christmas. But these are associative memories, not strongly sensory.

The memories that transport me to particular periods of my life, rather than specific events, are triggered by simple aromas. Caramelizing sugar brings me back to early childhood, my mother making sucre à la crème on the stovetop. Roasting garlic and lemon are associated with my university years, when my idea of sophisticated home cuisine was 40 Cloves of Garlic Chicken. Rhubarb cooking down is the scent of early summer, reminding me of the building excitement as the school year neared its end. Rhubarb found its way into puffs, crisps and pies, but one of the first things my mother always did with it was to cook some down on the stove with sugar. It would often end up served over ice cream, usually on a hot June day.

We’ve not had many hot days this month, but this afternoon I evoked the memory of warm days with this week’s French Fridays recipe. Instead of cooking it down slowly on the stove, though, this recipe calls for chunks of rhubarb to be tossed with sugar and freshly grated lemon zest (I added a pinch of cinnamon, too) and then roasted in the oven. This method requires almost no attention – no frequent stirring and temperature checks and leaves the pieces of rhubarb soft, infused with the flavour of the sugar. Cooking rhubarb on the stovetop breaks down its fibres, incorporating the sugar syrup, but this method leaves the rhubarb intact, surrounded by a sugary sauce. It’s a lovely variation and just as good with ice cream as the original. 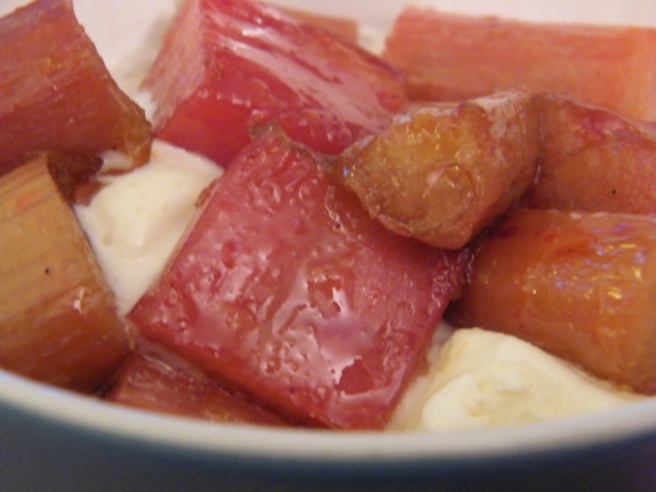 What are some of the things that trigger sensory memories for you? Scents, sounds, colours? I’d love to hear.

You can find many other blogged descriptions of this week’s FFWD recipe here: Roasted Rhubarb