I’ve never understood why beets are on the no go list for so many people. They show up on the plate in so many different ways, they’re good through all four seasons, and they’re sweet and earthy without being too assertive. I hated pickles growing up, but my mother’s pickled beets were the exception. The only thing that can spoil borscht is too much vinegar. How many vegetables are good steamed, boiled, roasted or raw? You can even make cake with them.

Raw onions, however, give me pause. A little of those go a long way for me. I’ve even been known to discreetly slide thick rings of raw onion from sandwiches. I like them best when they’re chopped finely and used sparingly. The inclusion of raw onions in this week’s French Fridays recipe didn’t pose a problem for me, because they are thinly sliced and soaked in cold water to get the worst of the bite out. Then, they’re plunged into ice water until it’s time to sprinkle them on the salad. 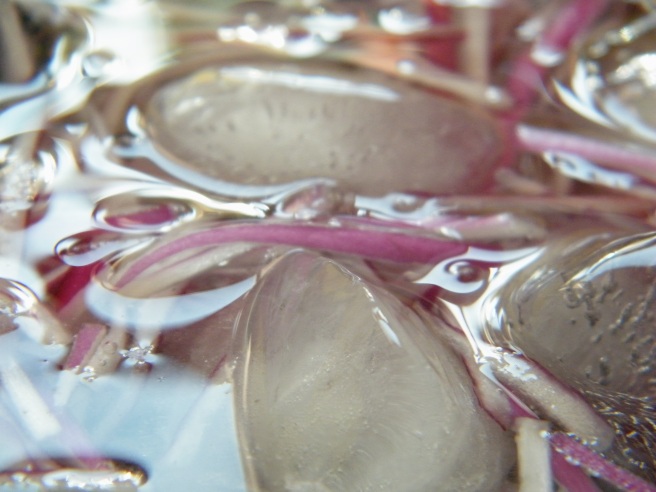 The salad itself is made of cooked, diced beets in a herbed honey-mustard vinagrette. I roasted some heirloom beets, striped to match the red onion, and substituted Italian parsley for the fresh oregano. The tamed onions make a nice, crunchy contrast to the roasted beets. This salad can be dressed up (as in Trevor’s version) or dressed down – I served mine with Dubliner/thyme scrambled eggs.

For dessert, I roasted strawberries using Heidi Swanson’s method and served them over lemon sorbet. I substituted cognac for the port, but that didn’t seem to diminish the goodness.

You can find many other blogged descriptions of this week’s FFWD recipe here: Chunky Beets and Icy Red Onions