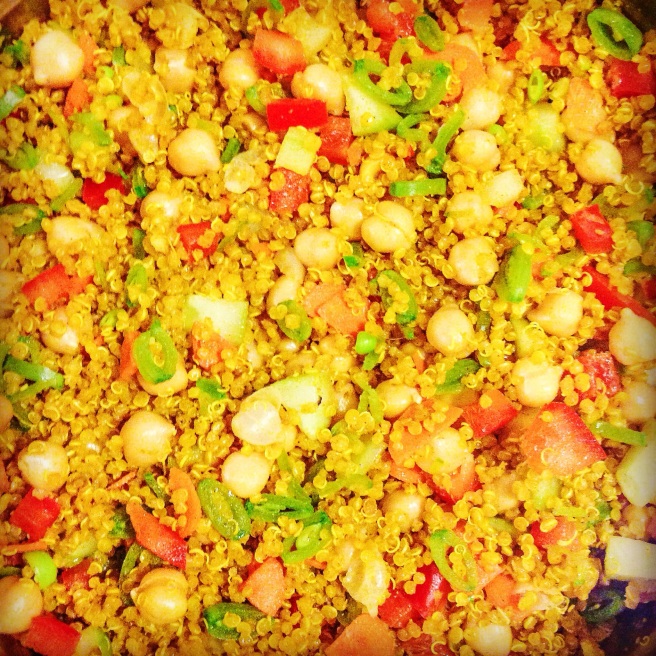 I’m a rather mediocre meditator. If I go to a sit or even a day-long retreat, I can meditate successfully and feel as though I’ve gotten a lot out of it (which is entirely the wrong attitude, I know). But, on my own, it doesn’t happen. At least not in that formal, sit and allow your thoughts to pass through, focusing on your breath, kind of way.

My true meditative practice happens when I’m out in the garden or chopping vegetables in the kitchen. It’s in those moments, or in the in-between spaces like a quiet bus ride or a long walk, that I truly reach for a meditative state. The demonstration of this kind of practice is one of the reasons I love the film How to Cook Your Life.

And yes, this week’s French Fridays assignment put me in mind of this, as I cubed or thinly sliced a heaping plateful of vegetables today. Now, I should let you know that the recipe for this week wasn’t actually quinoa salad, it was couscous salad. But, since the other half of the household can’t have gluten, I decided to change it up a bit. It’s a Moroccan-inspired take on a grain and vegetable salad that didn’t suffer at all from the substitution. In fact, I loved the colour the tumeric and other spices lent to my plain quinoa.

You can find the recipe on Epicurious, along with the suggested accompaniment, lemon chicken. Because quinoa is packed with protein, we were able to make a vegan supper of it, along with some corn on the cob.

And as an added bonus, Kevin declared this the best recipe I’ve tried recently. Now, that’s something to contemplate.