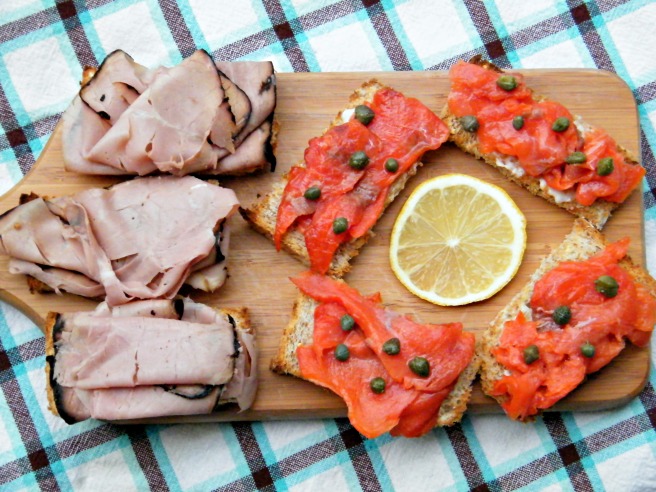 When I tell people I’m part of a group that’s cooking through a French cookbook together, I think they imagine the classic dishes set forth by Julia Child or the regional comprehensiveness of Elizabeth David. There are plenty of classic dishes and regional favourites, it’s true, but the book also reflects the diversity of modern France. It’s further inflected by a sort of translation wrought by its American author, who wrote the book with North American kitchens and pantries in mind.

The recipes are transformed, once again, by the time we post our versions each Friday. Each take on the recipe can’t help but be inflected by the individuals who make them, in kitchens across the world – the United States and Canada, yes, but also Argentina, Germany, Malaysia, Australia, and more.

So, when I tackled this week’s recipes, two tartines from a popular café in Dorie Greenspan’s Paris neighbourhood, it’s not surprising that they ended up with a faint Italian accent. Commercial Drive is still (symbolically, at least) the heart of Vancouver’s Italian community. Many of the cafés, bakeries, and delis have a long family history here, even though the children and grandchildren of their founders have had to move out of the area as housing costs increased.

I made two stops in my quest for ingredients for the tartines. First, I went to The Daily Catch to pick up some smoked Sockeye salmon. Then, I headed over to Bosa for the roast beef and bread. Bosa has opened up an enormous Italian grocery store and deli in the furthest eastern regions of the city, but their original location is just a few blocks away and has a great selection in their deli case.

When I got home, I sliced the whole wheat and millet bread into strips, then toasted them under the broiler.

For the tartine norvégienne, I spread the toast with a bit of mayonnaise, instead of butter, and freshly ground pepper, before layering the salmon and capers on top. I finished them with a squeeze of lemon.

The toast for the tartine saint-germain was spread with a mixture of mayonnaise and Dijon mustard (in hopes the mustard would impart a hint of Paris), then a layer of thinly sliced cornichons, and a generous layer of garlic roast beef.

The tartines in Around My French Table are a reminder that sandwiches, open-faced or not, can be richly flavoured and sophisticated. I would serve these tartines at a cocktail party or as part of a first course. I’m also counting the days until I can have another Goat Cheese and Strawberry Tartine with local berries.

In the meantime, I’m going to read through the rest of the Doristas’ versions of this week’s tartines, so their personal and regional inflections can inspire my own cooking experiments to come.

You can find many other blogged descriptions of this FFWD recipe here: Two Tartines from La Croix Rouge