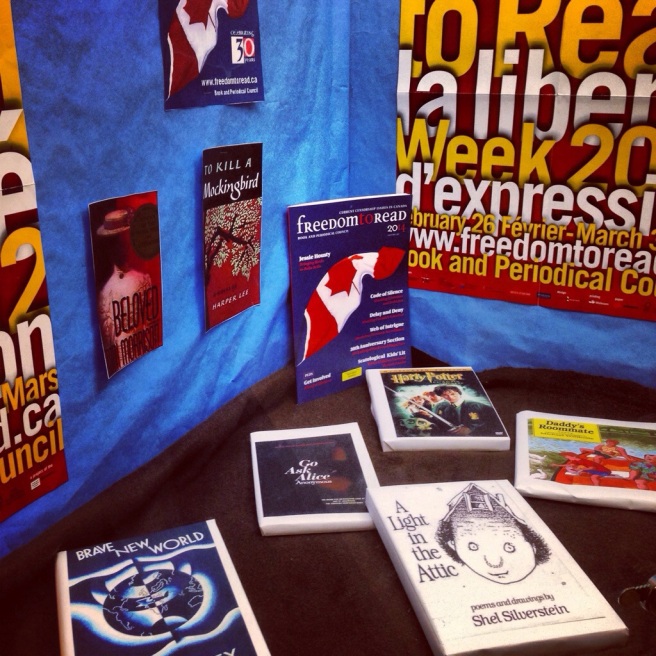 Literary works may best be seen not as texts with a fixed sense, but as matrices capable of generating a whole range of possible meanings. They do not so much contain meaning as produce it.

Terry Eagleton, from How to Read Literature

Freedom to Read week starts on February 23rd this year and “encourages Canadians to think about and reaffirm their commitment to intellectual freedom, which is guaranteed them under the Charter of Rights and Freedoms.” It’s a time to stand up for works that have been banned or challenged and to speak up for the belief that one’s moral universe will not be shaken or shattered in the face of art that may not be in line with it.

So, it’s with more than a little chagrin that I turn to the topic that I’ve been thinking about for the last week or two. You may have heard that J.K. Rowling has had misgivings about one of the primary relationships in the Harry Potter series. That’s not what I’ve taken issue with; plenty of writers have had second thoughts or regrets about texts that their readers regard as fixed, as this insightful piece from The Millions demonstrates.

What has been bothering me is some of the response to Rowling’s declaration. Particularly the listicles ranking the lousiest matches in literature, with this one being the worst offender. It’s as though the characters from works of literature were lifted out of any contextual relationship to the novels they inhabit and dumped into a plot-driven television drama. It makes me want to confiscate the listicle-assemblers’ copies of the books they refer to and put them into more responsible hands.

This isn’t the first time I’ve gone down this road (I know, I never learn). I once got into a scuffle with another reader of Tess of the D’Urbervilles on a reading forum, because she was shocked and disgusted that a woman of such low character could be the heroine of a romance [sic] novel. As I recall, I replied with an impassioned retort that Tess’ approach to the gallows was a profoundly feminist critique of the strictures of Victorian class and gender roles and that the angry reader should probably avoid reading literature in future. I just angered her further, mostly because she hadn’t read to the end of the book before she posted her review and now she knew the ending. That was the end of my online literary discussions.

In my defence, if that’s possible, it’s not that I’m taking issue with what people read, but with how they read it. You don’t need to have the same interpretation of Hardy’s novels as I do, but I wish more people would take the time to read literary novels as a whole, rather than focusing solely on the plot.

But, don’t take my word for it. Terry Eagleton’s latest book, How to Read Literature, is a funny, deft primer on how to approach literature. I read it around the same time those damnable listicles came out and I enjoyed the way he works through various aspects of the novel (nod to E.M. Forster intended), demonstrating the pleasure that can be had from paying closer attention to character, structure, and interpretation. It was a nice corrective. I’d also recommend Francine Prose’s Reading Like a Writer, in a similar vein. Whether they’re reminders or road maps for the reader, they encourage deeper, more thoughtful engagements with reading.

In any case, you’re probably better off with the librarians than you are with me. They will encourage you to read deeply in the directions you choose, without any curmudgeonly grumbling about how you do it.

3 thoughts on “Readers Need Sharpening, As Knives Do”