I once knew someone who believed that a restaurant that didn’t bring bread to the table shortly after you were seated didn’t deserve a clientele. I’m not that strict, but a meal started with bread fulfils some deep-seated ideas of sharing and conviviality for me, especially when the bread is homemade.

Bread-making is a satisfying activity, beginning with the tactile pleasures of kneading and shaping the dough. By the time it’s brought to table, all the senses become engaged. Knowing that the bread has been made to share with exactly those people around the table engages the heart, as well.

I made two loaves of this fougasse during the last bakestravaganza with my family. What was planned as a day’s baking stretched into a weekend, as much of what we were making needed time to rise and rest between steps. You can see what we worked on together over here. I also managed to catch up on the Navarin Printanier from a couple of weeks ago (which I’ll post about soon) and this week’s fougasse.

I put together this dough late the second night and baked it between the steps of our other recipes. My niece zested a lemon for me while I chopped olives and rosemary. These were added to the dough at the end of the kneading process (all hail the KitchenAid, once again). Once the dough had risen, it went into the fridge for an overnight rest (right beside the brioche dough we’d prepared for the pecan sticky buns that were going to keep us busy for much of the next day). 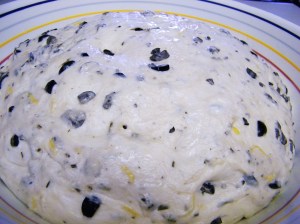 The dough reminded us of pizza dough, a little sticky and stretchy, but ultimately agreeable. It was easy to roll and slash the dough into the traditional leaf shape, but my attempt to make a salmon shape with the second piece of dough turned into an oval of bread with asymmetrical slashes. Not ugly, but not elegant, either. We ate it first.

The first loaf disappeared that afternoon, as people passed through the room where it was cooling, and we shared the second with our dinner of lamb stew. Pulling pieces from the loaves gave us almost as much pleasure as eating it and it was just as good on its own as it was sopping up the gravy of the stew. Sharing one loaf, all hands breaking off their portions, made our meal seem like a feast and a celebration of the cooking and baking we’d done together over the weekend.

You can find many other blogged descriptions of this week’s FFWD recipe here: Provençal Olive Fougasse