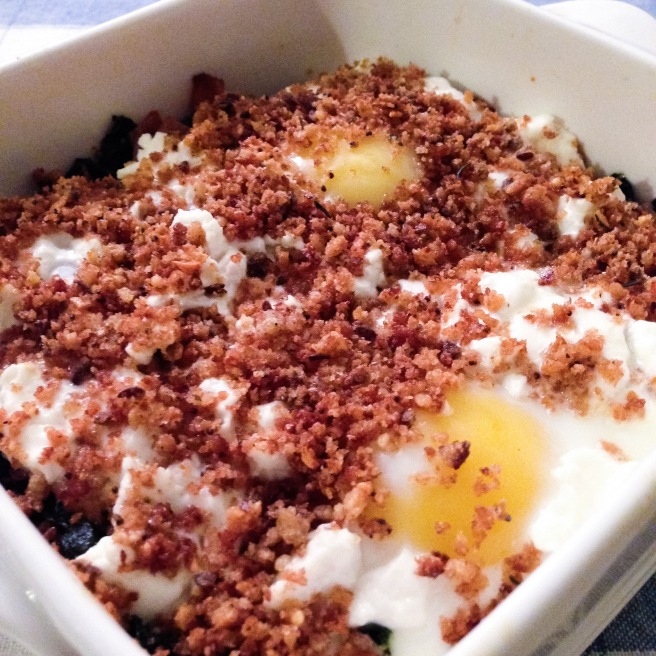 Spending your formative years watching classic movies can leave you with some curious notions. For the longest time, I thought that cracking wise was the telltale sign that someone was interested in you, which got me into trouble now and again when I tried to put it into practice. I also believed that a meal of eggs cooked late at night was the height of sophistication. (Later analysis made me suspect that it was just a way of connecting with Depression-era audiences.)

Still, there’s a shadow of that idea left in me, making me rather pleased with myself whenever I make an egg dish more complicated than sunny side up. And truly, eggs have a little bit of magic about them. Until we all discovered aquafaba last year, there really wasn’t anything that could rival eggs’ versatility.

Which is why I felt a little self-congratulatory when I pulled these baked eggs out of the oven. It’s hard not to feel pleased when the result looks so pretty, with swaths of goat cheese and garlicky breadcrumbs surrounding sunny yellow yolks. And with layers of ham and kale underneath, it’s just as pretty when you dish it out. There’s no evidence of that in this post, because it disappeared too quickly to document. A victim of deliciousness.

I baked a half-sized portion of this dish, but I made the full amount of kale and tripled the breadcrumb recipe. Which means that I can do it all over again this weekend. I’ll also have plenty of breadcrumbs left over after that, which is a wonderful thing. Full of butter, garlic, and thyme, they’re like a culinary secret weapon.

I even have an excuse to try it again soon. I’m in the midst of my yearly pre-holiday eating-down-the-freezer routine, so I used some ham that I had on hand. The original recipe calls for smoked salmon and I’ll need to do a taste comparison – in the interests of fairness, of course.

You can read through everyone’s posts here. And consider joining this community of wonderful cooks and lovely people, as we work our way through David Lebovitz‘ My Paris Kitchen.

9 thoughts on “Cook the Book Fridays – Baked Eggs with Kale”