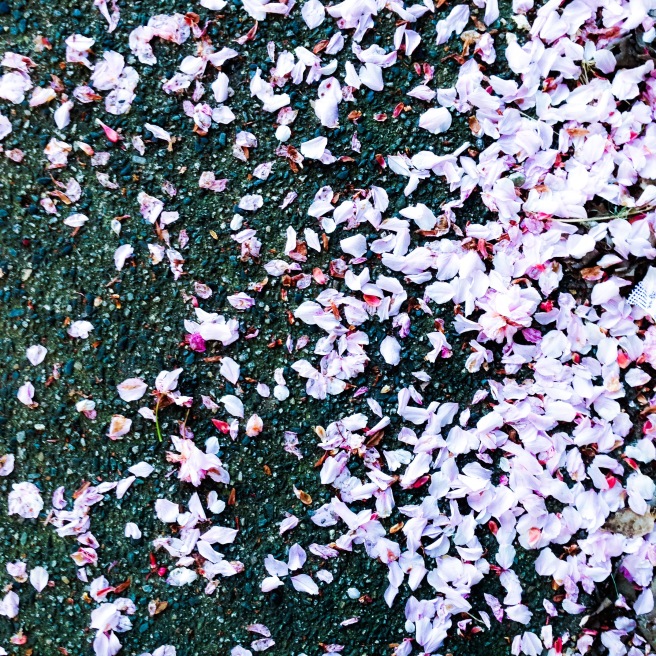 It’s hard to believe we’ve come to the end of our time with River Cottage Veg. Collectively, the bloggers of The Cottage Cooking Club have worked through every one of the 200 recipes included in the cookbook.

This cook-a-long came at a fortuitous time for me. My partner was moving toward veganism and I wanted to build some plant-based cooking into my blogging routine to support him. We’ve always eaten a lot of vegetarian and vegan meals, but ensuring variety is a great incentive to keep going when you’re changing the way you eat.

It was also a chance to keep cooking alongside one of the talented bloggers I’d met through French Fridays with Dorie. Andrea of The Kitchen Lioness posts wonderful recipes with gorgeous photography, in a blog full of family adventures, travel tales, and explorations of her city and region. She’s been a terrific leader, from the structure she devised that allowed the group as a whole to complete the book in two years, to her always supportive comments on every participant’s blog.

My last month didn’t go as planned. I’d promised to blog about three recipes this month, but only managed two – one of which was the wrong variation of the dish. I guess it goes to show that improvisation is as much of a kitchen skill as any of the others that everyday cooks perform.

I made this recipe in March, as I’d gotten a great deal on eggplant and bell peppers and was looking for a tasty way to use them. As luck would have it, this dish was due to come up in our very last rotation.

This is one of the dishes I hadn’t noticed while paging through the cookbook and it’s another one that Kevin wishes I’d made much sooner and often. Oven-roasting brings out the flavour of all the vegetables beautifully. We’ll be making this one as often as we can get our hands on good eggplants – I can hardly wait to try it again in high summer. 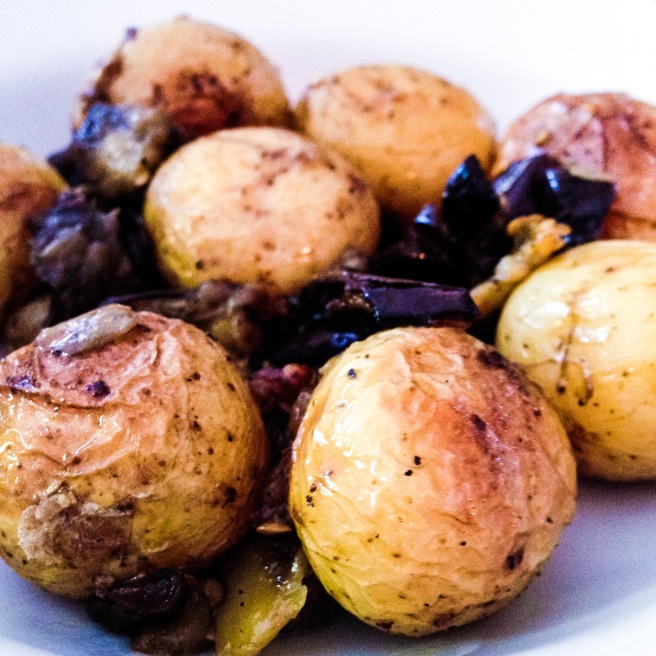 Another eggplant dish and another recipe in Kevin’s Favourites column. I was supposed to make the spiced eggplants with chickpeas, but when it came time to make my shopping list, I looked at the wrong recipe. We’ve got more eggplant in the refrigerator, so I’ll probably correct this error soon. At least it was a delicious mistake.

Quinoa with Zucchini and Onions 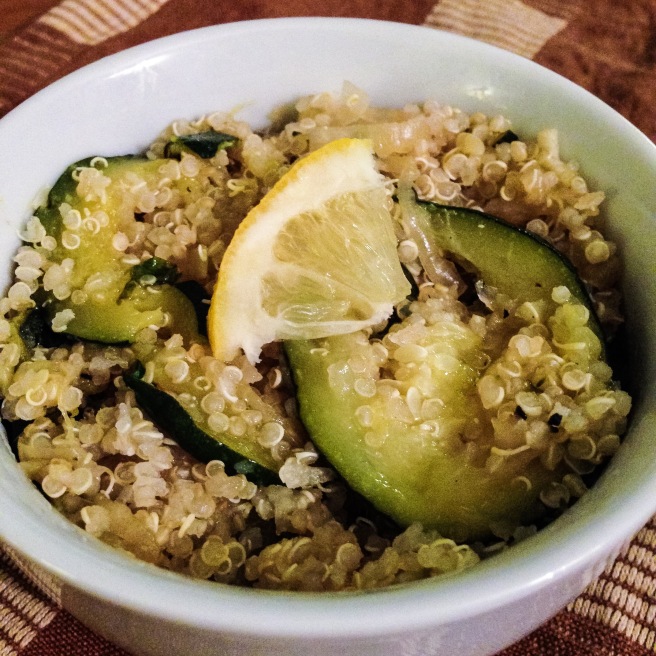 Speaking of delicious mistakes, this dish was supposed to be quinoa with leeks and squash, but once again, I looked at the wrong recipe. Kevin was pleased with this mistake in particular – he loves zucchini and tolerates squash. I’m happy with either. I skipped the nuts and doubled down on the lemon in this dish. It makes a great side, but a bowlful made a satisfying lunch, too.

That’s it for this month’s selections – I was supposed to make Spiced Spinach and Potatoes as well, but every time I set aside some cooked potatoes for the dish, they ended up being used for something else. I suppose I’ll have to plan to make another dish that uses leftover potatoes, then perhaps I’ll make this dish instead.

The rest of the recipes I tackled this month were from previous months’ selections. I go through periods of focusing more on ingredients than recipes I’ve undertaken to make. It always leads me to recipes I might have overlooked otherwise.

This sauce is a component of several of Hugh’s recipes, so when I picked up a big bag of hothouse tomatoes, I decided to give it a try. Hothouse tomatoes need help and roasting is the best way to get the most flavour out of them. I added some grape tomatoes I had on hand, as well. The sauce is seasoned only with garlic, thyme, salt, and pepper, but it is rich and delicious on its own and even better as the base for soups or stews.

You’re supposed to seed and skin the tomatoes when they’re roasted, but I threw them into the food processor whole. I like using the whole vegetable when I can and there’s pectin in the skins, which helps to thicken the sauce. I know it’s less refined, but for my purposes it worked beautifully. I used it in two more of Hugh’s recipes and had enough left over to enjoy on its own.

It’s been an eggplant kind of month around here, hasn’t it? This dish would be good even with store-bought sauce, but Hugh’s roasted tomato sauce made it fantastic. I especially appreciated that the dish included a homemade curry paste – that’s often the difference between delicious and mediocre with Indian-inspired dishes. 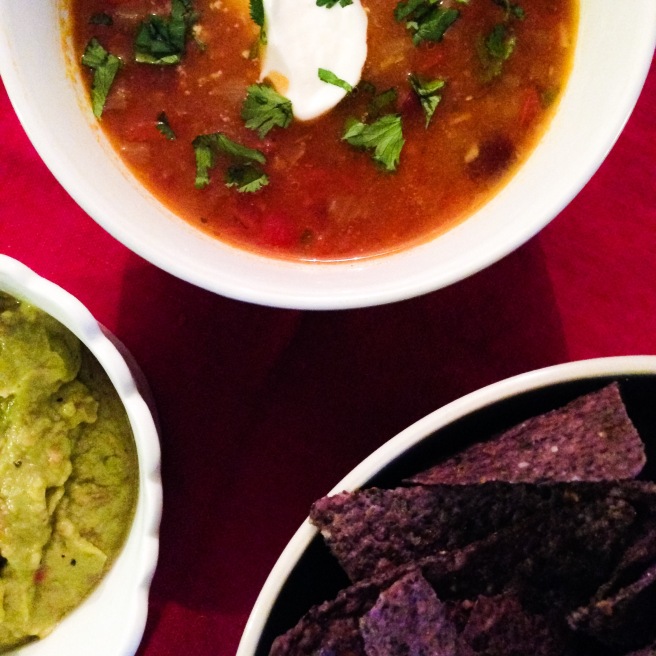 Hugh’s sauce went to good use in this soup, too, a Mexican-inspired dish that is just fiery enough to wake up the palate without drowning out the other flavours. It should be called double tomato and black bean soup, because there is quite a lot of fresh, diced tomato along with the roasted tomato sauce. This one was a hit at home and then again for my parents. Their only complaint was that the container I’d sent home with my mother was too small.

This is a recipe that I’ve been meaning to make since I got the book, but I’ve not gotten around to it until now. The combination of cremini mushrooms, coconut milk, curry, and peanut sounded intriguing. Kevin said it put him in mind of a vegan version of chopped liver. It’s certainly meaty enough to use as a sandwich filling, as well as a dip. I’d like to serve it at a tapas party. I think it would be one of the dishes that gets everyone talking.

So that’s it – the last of my posts for this cookbook. While our group may be finished with River Cottage Veg, our household certainly won’t be leaving it on the shelf. There are too many pages marked with notes, variations, and exclamation marks. And there are plenty of bookmarks for recipes we haven’t yet gotten around to trying.

I am excited to see what Hugh has on offer in River Cottage Every Day. I’ll continue cooking along with the group, but I’m going to stick to vegetable-based selections, as I’ve found that this monthly date with plant-based cooking has been great for our diets and palates.

You can find the rest of the group’s wrap up posts, here. I encourage you to check them out – you’ll meet some wonderful bloggers and get some great inspiration for vegetarian eating.

And you can join in on the Cottage Cooking Club’s next adventure, cooking through one or both of Hugh Fearnley-Whittingstall´s River Cottage Every Day and Love Your Leftovers – you can find the details, here.