I wandered down the Drive this evening, armed with an umbrella and a needlessly puffy raincoat, taking one final look to see if Jerusalem artichokes had shown up in the market.

This is what I found:

Not a sunchoke in sight.

So instead, I’m giving you a triple-barrelled catch up post.

Waaaay back in July, our lovely administrators Betsy and Mary allowed four of us to pick the recipes for that month. I chose this quintessentially summer soup. But before I could make it and post about it, I developed a flu and a sinus infection that kept me out of the kitchen for quite a while.

So finally, here it is, end-of-summer soupe au pistou presented to you when it’s cold and dark and rainy. My soup included some of the last of the beans, tomatoes, and zucchini from my garden and I had just enough basil left to make the pesto (but not enough for a garnish). I skipped the pasta and added extra potato instead. I also threw in a can of mixed Italian beans along with the chickpeas for extra heartiness. I kept it vegan for Kevin, so no pesto for him. My bowl had a healthy dollop of pesto and more than a pinch of Parmesan, which immediately melted into the hot soup. My soup wasn’t as clear as a traditional soupe au pistou because of all that extra potato, but it was awfully delicious all the same.

I don’t think it’s entirely inappropriate to be showing you this in October, actually. Like Smitten Kitchen’s Fall-toush Salad, this soup can be adapted for colder weather. At the end of every summer, I’ve always got a stock of frozen homemade pesto in the freezer – this year it’s mostly radish leaf pesto, because my basil harvest was unusually stingy. I think a swirl of summer in a bowlful of fall or winter vegetables sounds like a very good idea.

You can find the rest of the Doristas’ seasonally appropriate takes on this recipe here: Provençal Vegetable Soup

Now, for something you’d expect to see in October.

I love rice pudding, but it’s something I’m used to making when I’ve got leftover rice to use up. This rice pudding is doubly different from my usual practice – it’s made fresh on the stovetop and it uses arborio rice. The pudding is creamy with whole milk and from the rice itself. It’s flavoured only with vanilla, which plays beautifully against the caramel apples with their hint of lemon.

My caramel was a little thin, so next time I think I’ll do as Liz did and pull the apples out when they’re tender so that I can cook the caramel until it’s thick. We still loved it, though. The layers of caramel, apples, and pudding were so satisfying and the whipped cream added just the right taste and texture to make this dessert elegant and comforting all at once.

You can find the recipe on Epicurious and you can see everyone else’s posts here: Rice Pudding and Caramel Apples 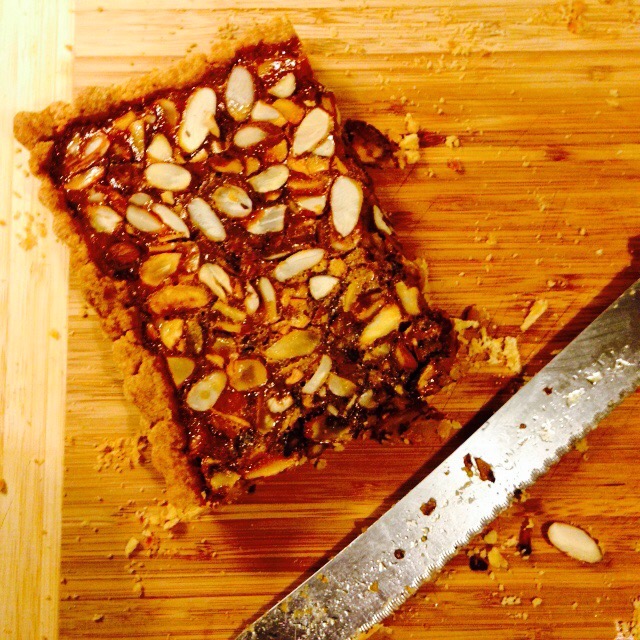 And finally, a dessert that made me very popular at our housing co-op’s general meeting this week. I made Dorie’s pâte sablée, or sweet tart dough, for the first time in a very long time recently. I’d forgotten just how good it is, so when we had a gap in food provision at the meeting this week (our co-op is so big on feeding its members that we wrote it into our Mission, Vision, and Values statements), I decided to catch up on this tart. It’s a good thing I waited until now to make it, because it’s so easy I’d have been popping it into the oven on a far too regular basis.

Who knew that par-baking a tart crust, toasting a few almonds, making a creamy caramel, and whisking up a custard could add up to something that (almost) looks like it came from a pastry chef? I think this is the recipe I’m going to pull out next time I really need to get someone on board with something.

Here’s the link to more posts about this beautiful tart: Caramel-Almond Custard Tart

There will be plenty of roasting vegetables in the oven this weekend – the markets are full of root vegetables, brassicas, and squash. But, I’m not exactly sure when sunchokes will show up here. The grocers I’ve asked so far can’t remember exactly when they start coming in, either. Whenever they do, I’ll be making this week’s dish, along with the Jerusalem artichoke soup that’s coming up in the rotation in the next month or two. Catch ups are my thing, apparently.

Now, if you’re curious about what the rest of the French Fridays crew got up to this week, you’ll have to look here: Roasted Jerusalem Artichokes with Garlic