One of the things you learn when taking part in a virtual cooking club is that there’s no such thing as universal. I don’t just mean time zones or even seasons, though our southern hemisphere friends have had to put up a valiant effort in the face of a schedule based on North American food cycles. Whether or not you’re able to complete the week’s assignment as written can depend on whether you’re urban or rural, on the coast or in the interior, near the equator or near the permafrost line.

We’ve had lively discussions about whether or not certain vegetables would be available when we wanted them and the substitutions we’ve seen give us insight into the personalities of our fellow cooks as often as they teach us about the regions where they live.

I’ve been pretty lucky in finding the ingredients I need, but it seems in the fish category there are a lot of Atlantic choices that don’t appear regularly in West Coast markets. This week’s dish called for monkfish, a fish that needs to clock a lot of food miles to find its way to Vancouver. I decided to look for a sustainable alternative and asked for some advice. 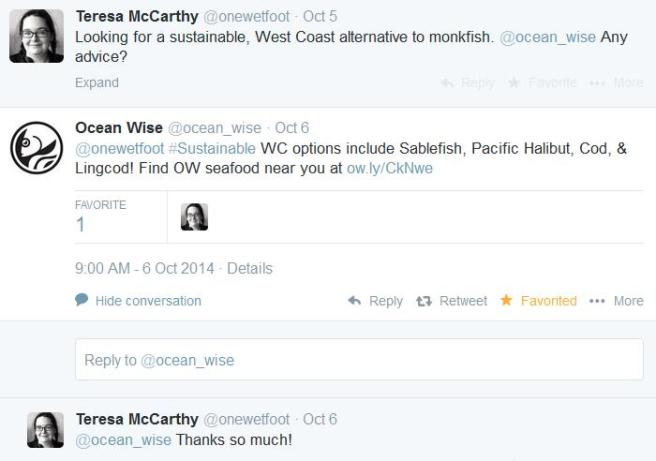 There was some nice BC sablefish at the fishmonger, so I went with that. It was a good choice for this dish – the flesh is rich and stands up well against the intensity of the carrots. Carrots cooked in carrot juice sounds a little strange, but the result is tender medallions in a sauce boosted with butter and fresh rosemary. This would have been nice with mashed potatoes or celery root purée, and that’s what I’d serve it with for a dinner party. Tonight, though, I was more than satisfied with the fish and carrots. I suspect the bits of bacon added at the end were what made me feel I had a well-rounded meal.

This quick bread is the reason this week’s post became a French Saturday entry. After dinner, I really wanted to bake something. Baking is an excellent antidote to a busy week for me. So, I took a look at my catch up list and got to work on this one. I had some Asiago cheese in the fridge to use up and I made a vegan tapenade (for what it’s worth in a loaf full of milk and cheese), but those were my only deviations from the recipe.

There’s so much Asiago packed into this bread that I’d nearly classify it as a bread-studded olive cheese, rather than a cheese and olive loaf. It’s full of Mediterranean flavours, with the tapenade and lemon zest providing bright notes against the sharpness of the Asiago.

My only regret is that I don’t have any bubbly wine to accompany this loaf. I urge you to pick some up before you attempt this recipe, which you can find on Dorie’s website.

Here are the links to the rest of the French Fridays crew’s posts on this week’s recipe: Monkfish and Double Carrots. And go way back to June of last year for a look at everyone’s Back-of-the-Card Cheese and Olive Bread.