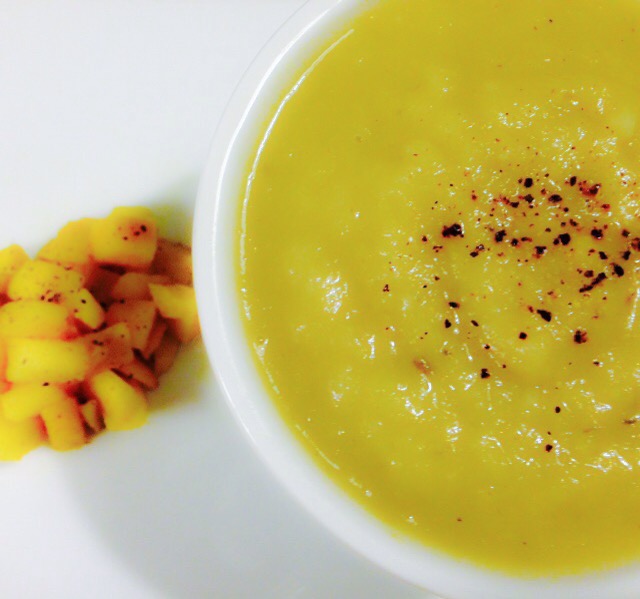 Four years ago this week, our first French Friday posts went up. It’s hard to believe that halfway through our fifth year of cooking together, we’ll have completed Around My French Table. Personally, I think we should all meet in Paris for gougères and champagne.

And I wouldn’t mind a bowl of this soup, either. Celery and celery root, with a hint of apple and a base of onions. I flavoured mine with thyme and rosemary, and added some shallots to the mix, but it’s Dorie’s bonne idée that makes this dish for me. The cubes of curried apple she suggests added a touch of complexity that I really enjoyed. I made a vegan version of this soup, but Kevin wasn’t that fond of it, so I think I might pick up some crème fraîche tomorrow. Then again, I might not – it stood up well without the addition of dairy.

The recipe for this week’s recipe is on Dorie’s website.

I’ve been meaning to catch up on this one for a while, but I didn’t really want to make a gluten-free version of it. It sounded too good with puff pastry. I finally found an excuse to make it last weekend, when my mother and sister-in-law came into town for a hockey game. I used puff pastry vol-au-vents rather than using a sheet of the stuff to make little pizzas – no squashing of flaky layers involved. (For a look at the virtues of flattening puff pastry, see Tomato-Cheese Tartlets.) I did follow the rest of the recipe, arranging thin slices of the ingredients in the vol-au-vents (and their lids) before sliding them back into the oven for a very short time.

It’s a surprising dish – there are so many flavours bursting through, including ginger, tomato, onion and radish, but they all complement each other. These were elegant, delicious little treats. And totally appropriate for a pre-game snack, right?

And now, on to the last six months or so of this cookbook. I can’t tell you how much I’ve come to appreciate my fellow cooks in this adventure. I hope you read through their posts; they’re a lovely bunch of folks.

Find links to the rest of the French Fridays crew’s posts on this week’s recipe here: Celery-Celery Soup. Then check out what Fresh Tuna, Mozzarella, and Basil Pizza looks like when you follow the recipe.