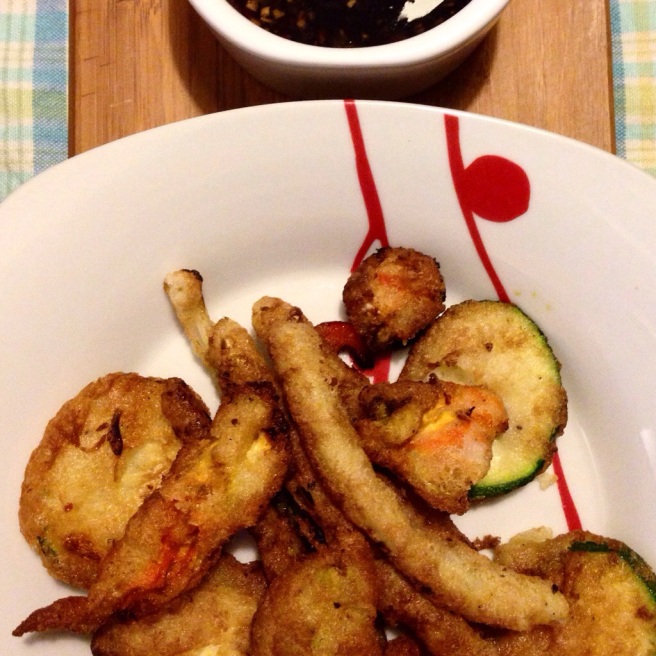 I’m a week behind with French Fridays, once again. Everyone else is writing about their adventures with Coddled Eggs with Foie Gras, but I’m going to tell you about deep-fried zucchini blossoms.

There was a little drama involved in collecting the blossoms for this recipe. I have two zucchini plants in my garden this year, but I wasn’t sure whether they would be ready in time for last week’s posting or not. At the beginning of the week, I could see that there were about six male blossoms getting ready to bloom – I thought I could safely take four and leave two for the bees. I watched them carefully and when they seemed like they’d be ready the next day, I went and got a variety of vegetables to batter and fry with them, along with the ingredients for Hugh Fearnley-Whittingstall’s
chile dipping sauce.

I went down to the garden the next morning and all six blossoms were gone. I don’t know if they dropped off the plants and shrivelled into nothing, or they got harvested by another creature who knew how good they were. In any case, I was disappointed.

Luckily, I only had to wait a few days more before I could try again. I harvested four blossoms, carefully laid them on paper towel and kept them in the fridge until it was time to stuff them. I used an herbed goat cheese to stuff mine, instead of the titular shrimp. I was surprised at how easy the blossoms were to work with – I had them cleaned and stuffed in much less time than it took to prepare the rest of the vegetables. I also substituted an equal weight of gluten-free flour for AP flour and the batter turned out perfectly.

However, I wasn’t quite finished with drama yet. My over-sensitive hard-wired smoke detector went off when I was about halfway through the vegetables I deep-fried along with the blossoms, so I had to abandon my cooking and wrap bags and tea towels around the alarm until it stopped.

All of the blossoms had been cooked and there was a plateful of vegetables for us to dip in the chile sauce, too. It was an enjoyable snack and the blossoms were delicious.

I’m not going to be repeating it, though. I’m not enough of a fan of deep-fried food to wrap towels around the smoke alarm very often at all. And the rest of my zucchini blossoms are being put to work producing enough zucchini to overwhelm me at the end of the summer.

This month, French Fridays is doing something a little different – four Doristas were asked to pick recipes and this perfectly seasonal, perfectly elegant pick was courtesy of Diane, from Simple Living and Eating – drop by and thank her for me, won’t you?

Find out what the rest of the French Fridays crew thought about this recipe: Shrimp-filled Zucchini Blossoms