Today brings something new to my blog, which will be happening monthly over the next ten months or so. I’ve teamed up with a few of my favourite bloggers to cook our way through River Cottage Veg. Our little group has been organized by the wonderful Andrea of The Kitchen Lioness and you can join us at the Cottage Cooking Club. Each month, we’ll be cooking up to ten recipes from the book and sharing our versions of the dishes. What we won’t be sharing is the recipes, unless there they’ve been shared online by the author or publisher. Some of us may also provide recipes inspired by the month’s choices.

This group came along at the perfect time for me, as my partner is moving toward vegetarian, and ultimately vegan, eating. I’ve always incorporated a lot of meat-free meals into my life, but it’s great to get some new recipes into my repertoire right now and see which ones appeal to Kevin the most.

This month, I chose six of the recipes to try. I probably won’t make that many of them every month, but there were a lot of favourite ingredients on this month’s list.

First up is a salad so good that I couldn’t help but share it with the group of bloggers who participated in the Canadian Lentils #LentilHunter Twitter chat that happened a few weeks ago. I loved the vinaigrette that was mixed into the lentils and then used to dress the greens. Kevin’s not a salad dressing fan, though, so I just squeezed lemon on his. We were both happy.

This is the sort of recipe I’ll revisit often, changing the ingredients according to the season. I used the organic French green lentils that I always have on hand, but this would be really special with authentic Puy lentils.

Try it for yourself – you can find the recipe here.

Quinoa with Zucchini and Onions

Not a hit for Kevin. I liked it, but would use less onion and perhaps a wider variety of veggies. I sauteed the garlic in butter before adding it, added a bit of balsamic at the end, and forgot the nuts. I think with a bit more experimentation, this could be a better dish for us.

Radishes with Butter and Salt

This one is a summer tradition for me. The bite of raw radishes is a perfect match for the soothing creaminess of butter. And salt just makes everything better. I did this with the first radishes from my garden and completely forgot to take a picture. I’ll add one the next time I do it. Shouldn’t be long.

I didn’t get a pretty photo of this one, but I loved it, ugly or not. I used a frozen gluten-free crust instead of the homemade pizza dough made with Hugh Fearnley-Whittingstall’s Magic Bread Dough. Next time, I’ll make it for gluten-eaters and use the dough, as Kevin wasn’t that keen on this dish. He would have preferred a traditional, tomato-based pizza with steamed asparagus on the side. 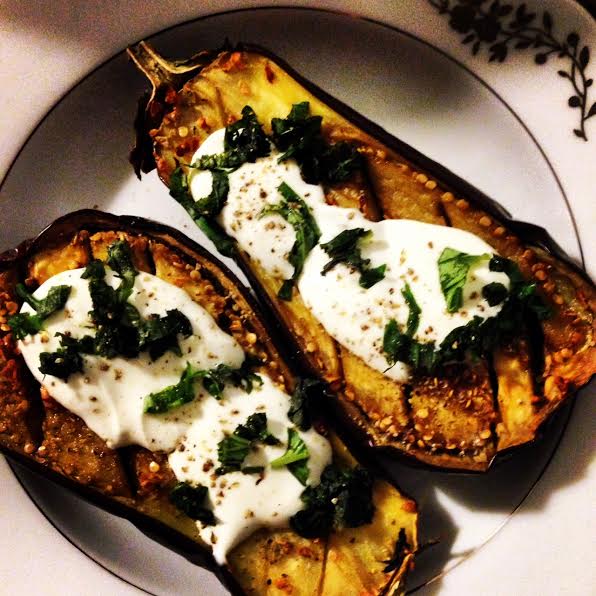 I was surprised that Kevin didn’t like this one more – eggplant is one of his favourite vegetables. One of the things we came up against in a lot of the recipes I’ve been trying lately is that he’s not a big fan of sauces or dressings. The plainer the better is his motto. So, I finished this on my own. I enjoyed it, but it won’t be replacing Ottolenghi’s roasted eggplant as my go to any time soon.

This dish was the winner of this month’s selections. We both loved it. This time, it made a great late night snack. Going forward, I think it will be a nice side for almost any Asian-influenced fare. I skipped the cilantro and added a little five-spice, but I would have been just as happy with the recipe as written. It’s easy to put together and I would be lying if I said I won’t be making this again for a lazy lunch or snack, all on its own.

Intrigued by this month’s recipes? Buy the book and join us.

Here are the links to the rest of the group’s posts for this month. I encourage you to check them out – you’ll meet some wonderful bloggers and get some great inspiration for vegetarian eating.