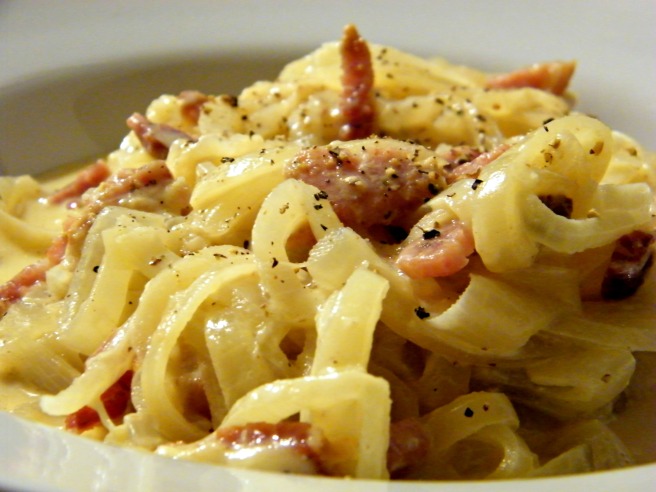 It’s the eve of Christmas Eve and I’m getting ready for a day of massive baking tomorrow, as I’m on Team Dessert for the big family Christmas this year. (I won’t be making many cookies, though, since I was lucky enough to win this from the lovely fellows at Boys Own Bakery.)

Tonight, however, was about relaxing and catching up on last week’s French Fridays dish. Onion Carbonara has a long history, as Mary relates in her post. Unlike its originators, I wasn’t attracted by the economics of the dish, but by the promise that it was one of those gluten-free dishes that doesn’t pale by comparison to the original.

In this version, steamed onions replace spaghetti as the anchor of the dish. It’s billed as an appetizer or a side, but I made two-thirds of the recipe and we had it as our main course. The steamed onions were sweet and crunchy, setting off the rest of the components so nicely that I didn’t miss the pasta at all. I do think that I’d like this version over pasta, too, and a number of other Doristas did just that.

I hope that you are surviving the whirlwind of the holidays, whatever you celebrate, and that you have lots of opportunity to enjoy good food and company before the turning of the year.

You can find many other blogged descriptions of this FFWD recipe here: Recipe Swap Onion “Carbonara”