Comfort food is usually associated with cold winter days. Casseroles and stews, carbohydrate-rich for warmth, protein-laden for energy, meant for eating in a warm, bright room that keeps the cold and dark out. This week’s French Fridays recipe would be perfect for that sort of meal. But, it was also surprisingly good as a late summer main dish alongside some beans from the garden.

I made Dorie’s bonne idée version of the recipe, first cooking the rice as directed, then stuffing it into peppers for a nice, long stint in the oven. 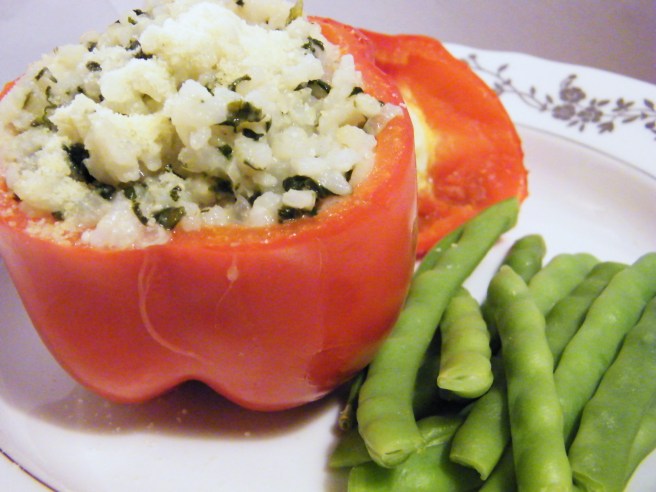 The rice itself is reminiscent of risotto, though Dorie is quick to tell us that it is really a faux version. It’s certainly creamy enough to pass for risotto (even though I used 2% milk in place of cream) and it doesn’t suffer from the blandness that sometimes plagues true risottos. I don’t really need to describe the flavour to you – the title of the recipe takes care of that. I will tell you that the sweetness of bell peppers suits this rice very well.

I made a full batch, but only made a half batch of the stuffed peppers. I think we’ll have the leftovers with a little fish tomorrow night. I’ve got more beans, some cucumbers and some beets, too. I think it will make as nice a summer side dish as it did a main. 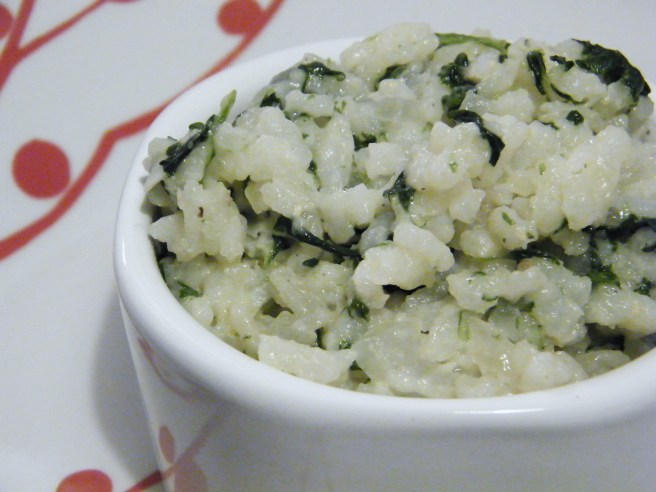 You can find many other blogged descriptions of this week’s FFWD recipe here: Creamy, Cheesy, Garlicky Rice with Spinach I’ve also just had my 100th post and am doing a little giveaway to celebrate.