I’ve always preferred leaner cuts of meat. When I was growing up, my family used to fight over who got to eat the chicken skin from my plate. None of them understood why I eschewed what they considered one of the best parts of roasted or fried chicken. I’d also carefully cut the fat from steak and pork chops and when I was confronted with ribs or pork roast, I stuck mostly to the vegetables on my plate. Later, one of my friends in University used to love sitting next to me at dinner, as she’d pull the pieces of fat from my plate and happily eat them.

I’ve gotten only a little more tolerant of the fattier portions of meat as I’ve gotten older, but I’ve never really become a fan. So, I was a little worried that I wouldn’t like this week’s French Fridays recipe. It uses short ribs, which are famous for their richly marbled fat. A selling point for most, I know. 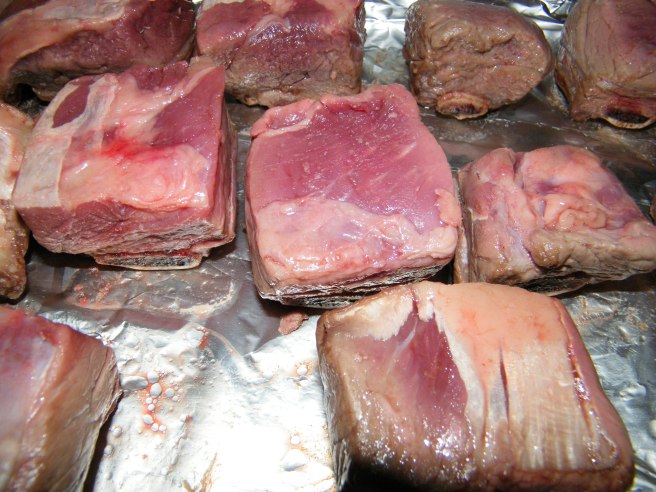 What’s brilliant about the method used in this recipe is that the meat rests overnight in the fridge, allowing you to easily skim off the fat before its final broil. The meat is first broiled before it’s braised and the broth it’s braised in is rich in exactly the way I like, fortified with beef stock, vegetables, port and wine. Then, the next day, the meat is tossed in some of the broth and broiled again. When it comes to the table, it benefits from the best of both techniques, the meat almost falling off the bone with the slightly smoky flavour of broiled bones. The braising liquid is strained and then used as a sauce, which is well worth sopping up with bread. Neither the meat or the sauce have the fattiness of barbequed ribs and the wine sauce is a nice change from the sharpness of the sauces usually used for ribs. 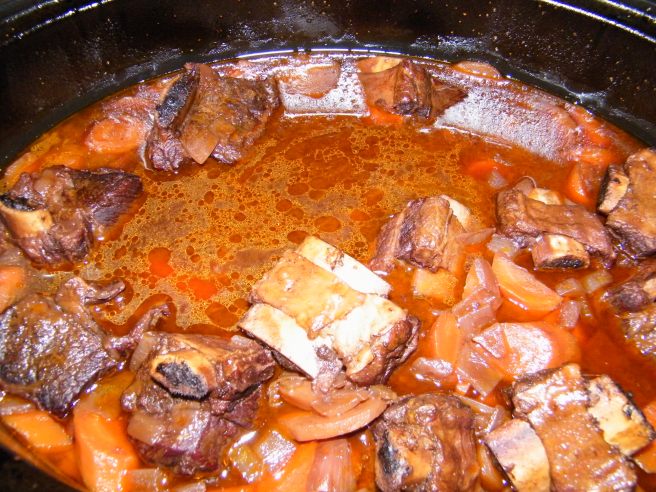 I halved the recipe and skipped the gremolata, serving it instead with boiled potatoes and steamed swiss chard. If I make a full recipe, for a crowd, I’ll definitely use the gremolata. Since it was just the two of us, I didn’t bother. The broth had enough flavour to make the meal interesting. The next day, I shredded some of the leftovers and warmed them with a little broth. Then, I toasted some spinach and onion Quejos and made open faced sandwiches. With a little salad on the side, I think I liked the short ribs even better than I did the first night.

I’m still not going to make ribs very often, but I think I’ll use this braising liquid with leaner cuts of beef – the port and syrah I used, along with the vegetables and herbs, make a wonderful broth.

You can find many other blogged descriptions of this week’s FFWD recipe here: Short Ribs in Red Wine and Port

30 thoughts on “FFWD: Short Ribs in Red Wine and Port”