I didn’t realize I came from a long line of lazy chicken roasters until I encountered Dorie Greenspan’s recipe for Roast Chicken for Les Paresseux in Around My French Table. In our family, the standard treatment for chicken was a halved onion and a halved apple in the cavity, with garlic and whatever herbs and vegetables were on hand. Roasted in a slow oven, with a basting session or two, it’s been a standby at least as far back as my mémère (my maternal grandmother). It’s such an easy recipe that when I was young, my mother allowed me to get it started after school, so that we could eat as soon as my parents came home from work.

I’ve experimented a fair amount with chicken since then (starting with 40 cloves of garlic chicken, which was my standby through University) and I’ve generally abandoned cooking whole chickens in favour of using chicken breasts and thighs. After making Roast Chicken for Les Paresseux, whole chicken is going back into the repertoire. 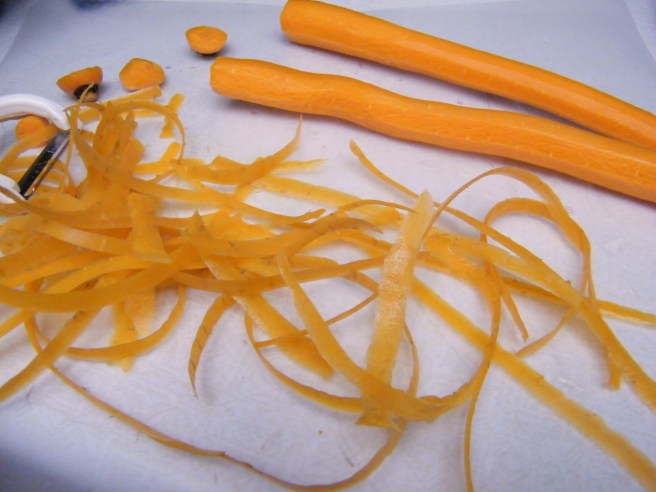 This recipe is even simpler than the one I grew up using. No basting, just an addition of vegetables (if you like) at the half way point. Fresh herbs, garlic, salt, pepper, olive oil and a little white wine are all that’s needed to make this dish fantastic. I especially liked the trick of cutting a whole head of garlic in half, leaving one half inside the chicken and one out. 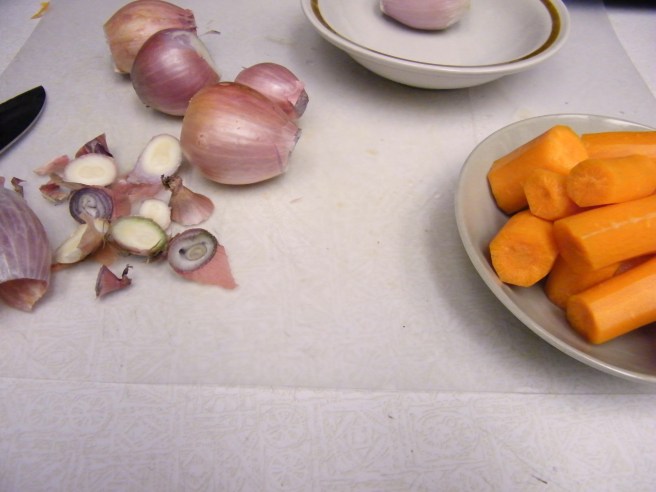 While the chicken roasted, I was able to prepare the rest of dinner, including getting a start on the dish for next week’s post, Pommes Dauphinois (or Potato Gratin). The only difficulty was concentrating on what I was doing, for as the chicken cooked, it filled the kitchen with a wonderful aroma. 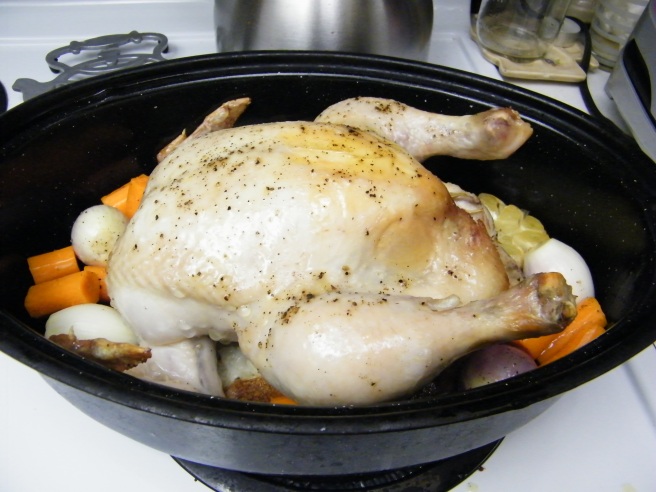 I don’t have a dutch oven, so I used a roasting pan. Since it doesn’t have high sides, I decided to roast the chicken covered. That didn’t seem to harm the chicken at all. After it was done, I let the chicken rest breast-down as suggested and the meat was wonderfully juicy. 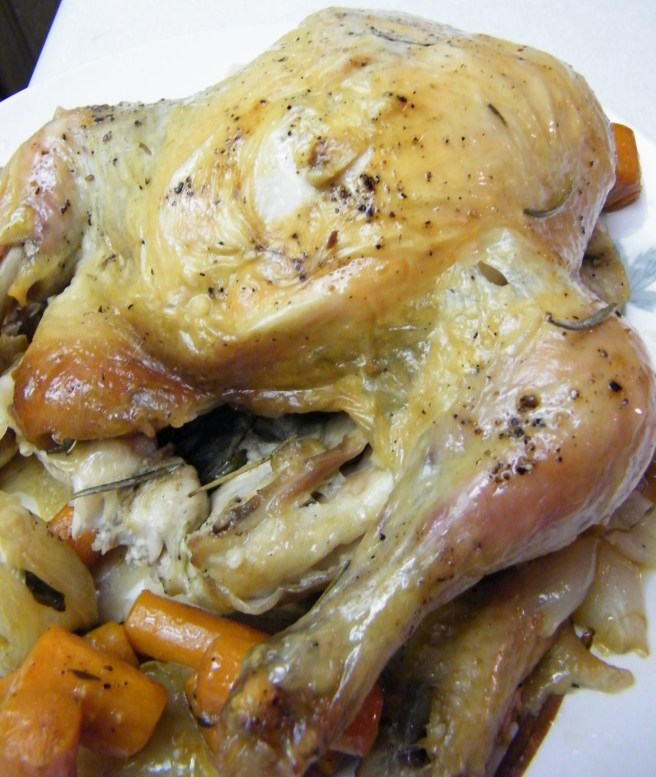 Finally, there’s the matter of the bread. Dorie recommends placing the chicken on a bed of thick bread or baguette. The bread is crispy on the bottom and full of pan juices on the top. I have only one photo of this bread, and only half the amount of bread I used at that, because it disappeared too quickly for me to have another chance at a better shot. This slightly blurry photo will serve as proof that the bread is as delicious as advertised. 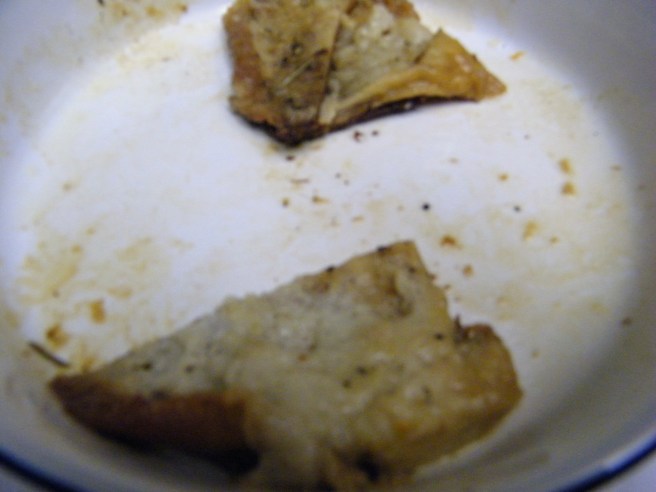 Today, I’m going to leave you with two recipes, since I mentioned them. You’ll have to buy Around My French Table for Dorie’s recipe, though. You should, you won’t be able to stop using it.

Lightly oil a roasting pan. Place the halved onion, the apple and the bay leaf inside the chicken. You can add some fresh herbs, if you like. I often use sage or savoury with this recipe. Place the chicken in the roasting pan. Scatter the garlic and remaining onions around the chicken. You can also add fresh or dried herbs to the pan and chunks of potato, carrot and celery (or whatever roastable vegetable takes your fancy). Sprinkle everything with salt and pepper.

Roast, covered, at 350° for 1½ to 2 hours, depending on the weight of your chicken. Baste once or twice during the cooking time, with the juices in the pan. You can take the cover off the chicken near the end, so that it browns.
.
To make the gravy, bring the pan juices to a boil, adding a teaspoon or so of flour or cornstarch. If you take a little of the heated broth and mix it with your thickener before adding it, you’re less likely to get lumps. Cook down until the mixture thickens, place in a container for a few minutes and then skim off the fat. This gravy is perfect with mashed potatoes, but that might just be my childhood speaking.

UPDATE: I spoke to my mother about this recipe and she said – no bay leaf, always rosemary and thyme, cook it for a longer time at 325° if possible. (This is what happens when a recipe is handed down verbally.)

40 Cloves of Garlic Chicken (remembered from the Urban Peasant)

Handy Hint: If you invite ten of your University friends over for dinner and decide to double the recipe (i.e., cook two chickens), don’t forget you might also be doubling the time it takes to cook. Especially when you have a tiny, unreliable oven. People get very hungry when you serve dinner at midnight. Don’t ask me how I know. It was a long time ago.

Rub the outside of the chicken with olive oil, then sprinkle well with salt and pepper. Lightly oil a roasting pan. Pierce a number of holes in the lemon with a skewer, then place the lemon inside the chicken. Put the chicken into the roasting pan. Break the heads of garlic into cloves and scatter the unpeeled cloves around the chicken. Add the wine, if you’d like.

Roast, covered, at 350° for 1½ to 2 hours, depending on the weight of your chicken. Baste once or twice during the cooking time, with the juices in the pan. You can take the cover off the chicken near the end, so that it browns.

There will be a lot of liquid in the pan, which makes a fantastic garlic-lemon gravy. Bring the liquid to a boil and cook down. You can add a little wine if you’d like and you can also add a little cornstarch or flour to help thicken the gravy. All optional. Once it’s thickened, pour the gravy into a container, let it sit for a few minutes and skim the fat from the top.

We’re doing things a little differently for the month of November. We’re still posting weekly, but people are free to post this month’s recipes in any order. You can find many other blogged descriptions of this month’s FFWD recipes here: LYL: November 12