“Hmm. Mustard Tart.” My father’s reaction when I told him what I was making wasn’t much different than my own. Neither of us hate mustard, but we’re definitely not fans. At home, I usually have some Dijon on hand for slathering onto lamb roasts, but it’s generally a lonely little jar.

The process of making this tart was what intrigued me. I wanted to try out the savoury tart pastry and the custard-like filling looked like an interesting cooking challenge. I also wanted to see if I could make mine look as pretty and professional as the example in Around My French Table. I just wasn’t sure if anyone was going to eat it. 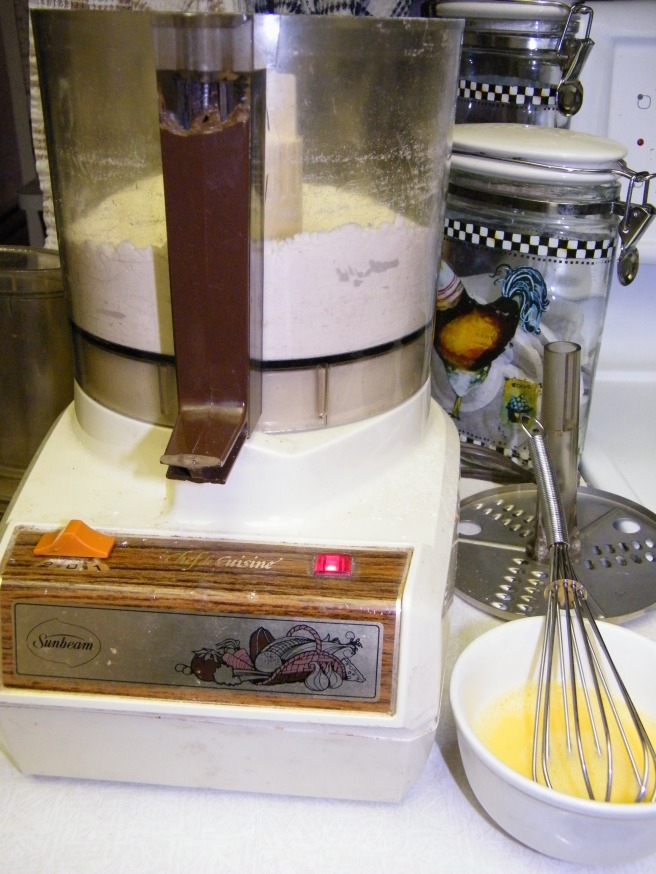 The tart dough requires some planning, as there’s a lot of chilling, freezing, baking and cooling involved. It’s not a spur of the moment recipe, but it lends itself to pre-preparation, as the dough can be kept refrigerated for several days before use. In my case, I was baking and cooking all day, so I just made the dough early and kept coming back to it at intervals.

I was surprised at how quickly the tart dough came together. I was using my mother’s old food processor, which no longer looks pretty, but works as well as it ever did. Wrapped in plastic, the dough went into the fridge for three hours. Out it came and it proved easy to work with, though it softens quickly. I was using a springform cake pan, rather than a tart pan, so I estimated the height of a tart and cut the dough accordingly. I had enough left over to fill a small ceramic dish. Then, into the freezer with both crusts.

An hour later, I pulled the pans out of the freezer and popped them into the oven. I didn’t use pie weights and the crusts didn’t suffer for it. They were golden and hadn’t puffed too much. I put them aside to cool.

After a while, it was time to tackle the filling. Preparing the carrots and leeks was really the only time-consuming part of this recipe and even that didn’t take much time. As long as you’ve taken the time for the tart dough, everything else is simple. I used heavy cream in place of crème fraîche, fresh rosemary from my mother’s garden and I substituted a bit of kosher salt for the fleur de sel. I used two mustards, one Dijon and one grainy, but they were probably milder than those called for in the recipe.

I was really pleased with the result. Though mine looked a little more…rustic…than the one pictured in AMFT, I thought they turned out perfectly. The taste was a surprise for me. The mustards had mellowed and merged with the other flavours and the tarts proved irresistible to everyone at dinner. By the next day, there was nothing left.

You can find many other blogged descriptions of this week’s FFWD recipe here: Gerard’s Mustard Tart