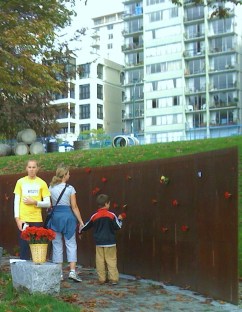 My mother and I have done the AIDS Walk together for five years.  We do it in memory of my Uncle Gerry, her younger brother, and we wear t-shirts that my mother had printed with his photo.  I find these shirts both geeky and moving.  We’ve been ridiculously lucky, as the weather has never been horrible, though in some years it’s been very hot.  The Walk runs along the Stanley Park Seawall for ten gorgeous kilometres, at least it did until the windstorm of 2006, when post-storm reconstruction shortened the route somewhat.  We’re among the slowest of the walkers and usually miss quite a bit of the entertainment along the way – the Vancouver Men’s Chorus is always packing up by the time we reach their station.  It doesn’t bother us, though; we spend the time talking about Uncle Gerry, our family, our sorrows and our joys.  I tease her, telling her that it is the one day in the year when she has nothing to do but just walk and be.  She’s an incorrigibly busy person.  Afterward, we go for lunch, and then ice cream at La Casa Gelato.

This year, though, I was on my own.  My parents were on vacation in the Maritimes with friends and this was the only time that worked for everyone.  The route of the Walk changed this year, too, and is much shorter.  The Walk now runs up the sidewalk from Sunset Beach almost to English Bay, then sharply turns onto the seawall running in the opposite direction.  The route was so short that there wasn’t time for everyone to pass me.  I was in the middle of the pack for the entire walk and even got to hear the Vancouver Men’s Chorus perform.  They were set up near the AIDS Memorial, which was filling up with red carnations as each group of Walkers passed.  My uncle’s name is not there, but that doesn’t matter; it’s a good place for remembrance.

Afterward, I walked back up to Davie, got myself some brunch and decided to walk home, which would bring me close to ten kilometres for the day.  The forecasted rain never materialized and the cool, cloudy day was perfect for walking.  My plan was to walk from the West End past Yaletown, through downtown and Chinatown until I reached Strathcona, where I thought I might take a break at the Union Market.  Walking down Davie, I stopped to take some pictures at the community gardens and I found myself thinking that my Uncle Gerry would have fit very well into the current renaissance of DIY culture.  He renovated spaces, cooked inventively and gardened prolifically in the ‘70s and ’80s.  And that reminded me of all the potential we’d lost to AIDS, along with the people.

I kept walking according to plan, but I never made it to the Union Market. Instead, I sat in McLean Park where the Strathcona Harvest Festival was taking place. It was the pie contest that drew me in. The judging had begun and there were young people with clipboards, cheerfully examining each of the entries. I loved the inventiveness of this festival, with its scarecrow-stuffing station, city chickens on display and pretty handmade banners. There was a powerful feeling of neighbourliness there, which isn’t surprising for Strathcona. Whenever I walk or ride down the bike path that cuts through the area, I have the sense that everyone knows each other. And that they do things together.

Incidentally, I think the Vancouver Foundation’s Neighbourhood Grants Program, which funded this festival, is spectacular. Since these grants became available, there have been canning workshops, block parties, small festivals – every year brings something new.

After a while, I felt rested and went over to The Wilder Snail to pick up a tea for the last leg of my walk home. I’m glad I stumbled upon the festival; our yearly ritual has always ended in a celebration.